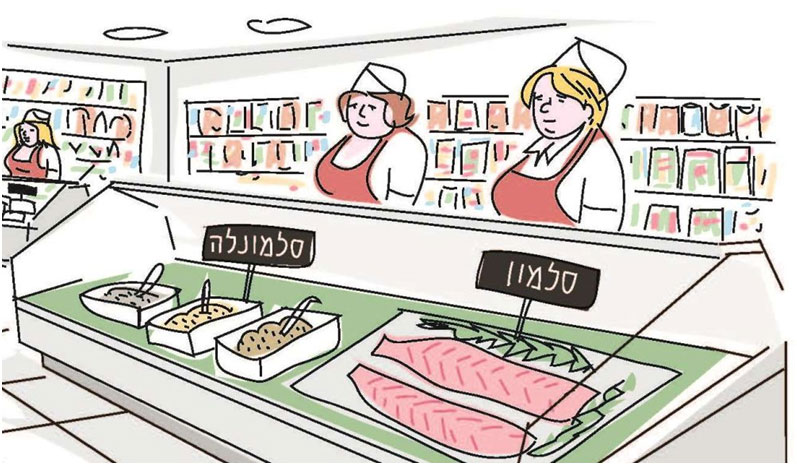 Salmonella spp. are Gram-negative pathogenic bacteria that infect a wide variety of mammalian, avian and reptile hosts. Infection with this highly versatile pathogen can lead to different clinical outcomes including asymptomatic carriage, gastroenteritis, or severe, life-threatening systemic disease, known as enteric fever. The nature and the severity of the disease is depended upon the infecting serovar as well as the infected host species and its immunological status.

Non-typhoid Salmonella enterica (NTS) serovars are a predominant cause of foodborne illnesses worldwide. The majority of cases present as gastroenteritis, which is mostly a mild to moderate, self-limited infection of the intestines. However, about 5% of these illnesses may be invasive, and manifest as bacteremia or other extra-intestinal infections. There are an estimated 93.8 million cases of gastroenteritis due to NTS infections each year, resulting in approximately 155,000 deaths. In addition, the estimated global annual burden of enteric fever due to typhoidal Salmonella infections is over 27 million cases, resulting in more than 200,000 deaths.

NTS is considered a zoonotic pathogen and many of these serovars are also capable of colonizing the intestines of food-producing animals and contaminate the avian reproductive tract and the laid egg. The routes of transmission include consumption of contaminated food from animal sources, particularly eggs, poultry, ground meat and dairy products as well as contaminated fresh fruits and vegetables.

The two hallmarks of Salmonella enterica pathogenesis are the invasion of non-phagocytic cells such as epithelial cells of the intestinal mucosa, and the survival and replication inside infected phagocytic cells. Both mechanisms, as well as many of the virulence determinants used by S. enterica, are directly linked to genes encoded within large horizontally acquired regions of the chromosome termed Salmonella Pathogenicity Islands (SPIs). 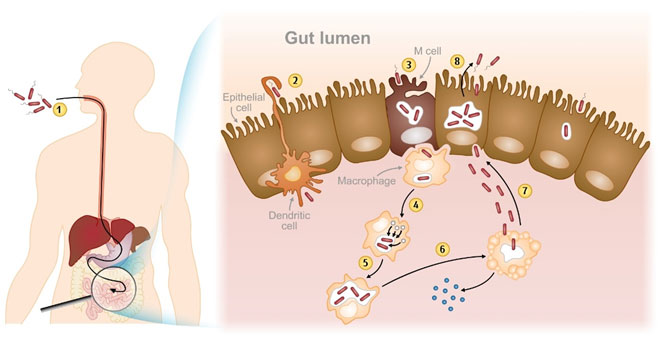 Fig. 1.Salmonella infection scheme. Disease caused by Salmonella occurs after ingestion of food or beverage contaminated with the bacterium (1). After gaining access to the gut lumen, Salmonella can cross the apical pole of the epithelial barrier either by passive mechanism facilitated by dendritic cells that emit pseudopods between epithelial cells (2) or by active invasion, mainly, via the M cells of the Payer’s patches in the ileal portion of the small intestine (3). Active crossing of epithelial cells requires the delivery of distinct effector proteins injected directly into host cells using a type III secretion system that is encoded by SPI-1 (Salmonella pathogenicity island 1), which also triggers gut inflammation.

In the subepithelial location, Salmonella are up-taken by phagocytic cells such as macrophages that transport Salmonella into the lymphatic system and disseminate the bacteria systemically (mainly to the liver, spleen and lymph nodes). Within the intracellular environment Salmonella establish a specialized vacuole known as Salmonella containing vacuole (SCV), which supports bacterial survival and replication (4-5). This stage requires the expression of SPI-2 genes, which encodes a second type III secretory system that allows injection of a different set of effectors from the SCV into the cell cytoplasm.

The presence of Salmonella within the cells may lead to cytokine secretion triggering inflammation and/ or programmed cell death (apoptosis; 6). Salmonella may also reseed into the gut by basolaterall invasion (7-8), excretion into the feces and bacterial shedding. 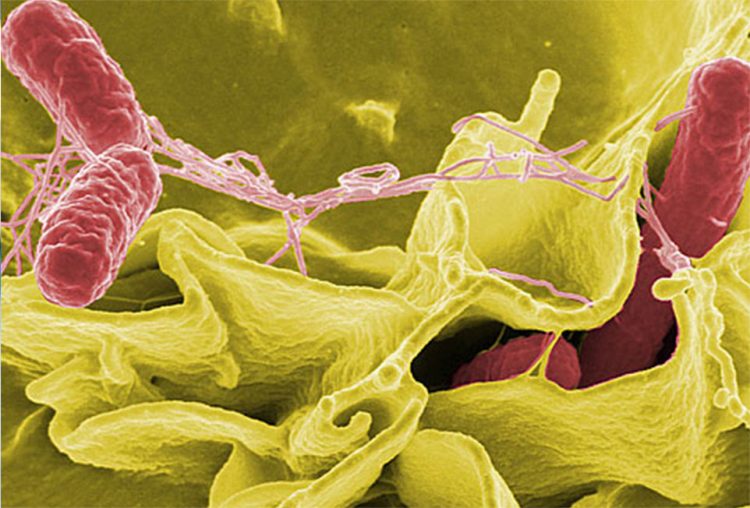 The Infectious Diseases Research Laboratory (Gal-Mor lab) is located at the Sheba Medical Center Campus in Tel-Hashomer and affiliated with the Department of Clinical Microbiology and Immunology Sackler Faculty of Medicine, Tel Aviv University. Our main research interests focus on the ubiquitous bacteria Salmonella enterica and the ways this pathogen causes diseases.